After having been sidetracked by AlphaGo for nearly a year, I finally had some solid thinking time for myself today. Mostly inspired by an [cached]interview with Yanis Varoufakis and a remark he made about why we need basic income, I started thinking about the big problems our world has and what I can do about them. These are from my perspective as a privileged first world citizen in the 1%, my aim is to identify the steps that are necessary to bring us to the next level as a species.

As an example - there are two ways you can solve global water shortage due to farming. Either try to work with farmers locally in each case and try to help them become more sustainable, or make nuclear fusion production ready, desalinate water on a large scale, [cached]grow crops underground with LED lighting where they are needed. This post prefers the latter approach.

If you are wondering what to do with your life, maybe this list can provide a little inspiration.

Remarkably little research seems to be done on the underlying causes of aging and life extension, almost all seems to be focused on simply treating the symptoms.

Exceptions are [cached]Calico and [cached]Aubrey de Grey. I especially recommend the following talk:

He basically lists 7 categories of cell damage that we need to successfully overcome to prevent the symptoms of aging and enable indefinite life.

What better place to start than a [cached]list of reasons why people die? 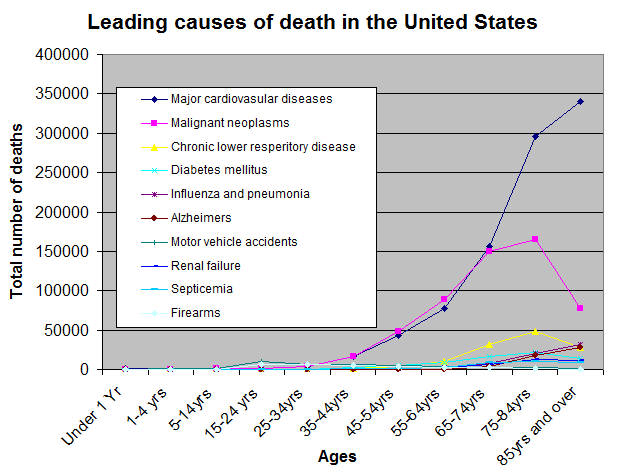 To summarize, cancer seems like the most pressing concern (as it can also occur in young people), followed by neurodegenerative diseases like Alzheimer's or Parkinson's, all of which present a major hurdle to successful life extension.

It's been clear for a while that [cached]human activity is causing large increases in temperature, the only remaining question is how dramatic the consequences will be. And while [cached]governments agreed to keep the increase below 2°C the plans they've submitted so far are not enough to achieve this.

Modern economic systems are becoming increasingly complex, to the point where the actions of a [cached]single trader can cause a complete market crash within minutes. And that's not even to speak of [cached]financial crisis caused by overly complex financial products, conflicts of interest and regulatory failure.

The reliance on oil will continue to lead to more and more problems (viz: middle east) until a full replacement has been found. Renewable energies alone seems impractical, if only because we don't want to plaster all available land surface with solar panels.

Additionally, many problems become a lot easier if you have a near infinite supply of energy. Climate Change? Simply pump CO2 out of the air and store it as carbon. Lack of Water? Just desalinate seawater.

There are several current attempts - [cached]ITER as a government project, [cached]Helion Energy and [cached]General Fusion as startups.

This is the part that originally lead me to write this post. Increasingly, low and middle class workers are not benefiting from increases in productivity and the gap between poor and rich is widening. This is only bound to get worse as AI and automation improve.

Yanis Varoufakis put it very concisely in the [cached]interview I mentioned above:

Hope is what is in deficit. Britain, the British public, has no hope. When they voted for Cameron last year it was not hopefully. It was reluctantly and because they did not like Ed [Miliband] and they did not trust the Labour Party. Now they will vote to stay in Europe out of fear, not out of hope. So what do we need to do to capture hope? That is the issue. In the 50s and 60s the dream of shared prosperity was that which gave hope. Even the Tories latched onto it: Ted Heath, the one nation Tories and so on. So I think the basic income approach is capable of doing this as long as (and this is what I emphasise when I talk to the Corbynistas) you can explain to them where the money will come from, that it will not be simply debt, that we are going to generate a lot more income and a chunk of it is going to fund this.

But we, the Left, must not be fearful. I gave a talk some time ago in the United States and said: yes, surfers in California must be fed by the rest of us. We may not like that, we may feel they are bums, but they deserve a basic income too. You need politicians that are capable of going out there and saying: “You see that lazy bum over there that you hate? We should feed him. And we should make sure he has a house. Because if he does not have a house and he gets sick and so on, he is a greater burden for all of us. And if there are lots of them and technological innovation produces a lot more of them, that would be macro-economically unsustainable. Those of us who want to work—because we enjoy it and have the opportunity—have the technology to produce so much wealth that we can feed the surfers.” But who says that?

Currently humanities fate is awfully intertwined with the single planet that we have. Should we get unlucky in any way it's game over.

The logical solution to this is to expand to other planets. I believe [cached]Elon Musk is already working on this, he's probably the best one to handle it.