To celebrate the publication of our MuZero paper in Nature (full-text), I've written a high level description of the MuZero algorithm. My focus here is to give you an intuitive understanding and general overview of the algorithm; for the full details please read the paper. Please also see our official DeepMind blog post, it has great animated versions of the figures!

MuZero is a very exciting step forward - it requires no special knowledge of game rules or environment dynamics, instead learning a model of the environment for itself and using this model to plan. Even though it uses such a learned model, MuZero preserves the full planning performance of AlphaZero - opening the door to applying it to many real world problems!

It's all just statistics

MuZero is a machine learning algorithm, so naturally the first thing to understand is how it uses neural networks. From AlphaGo and AlphaZero, it inherited the use of policy and value networks1: 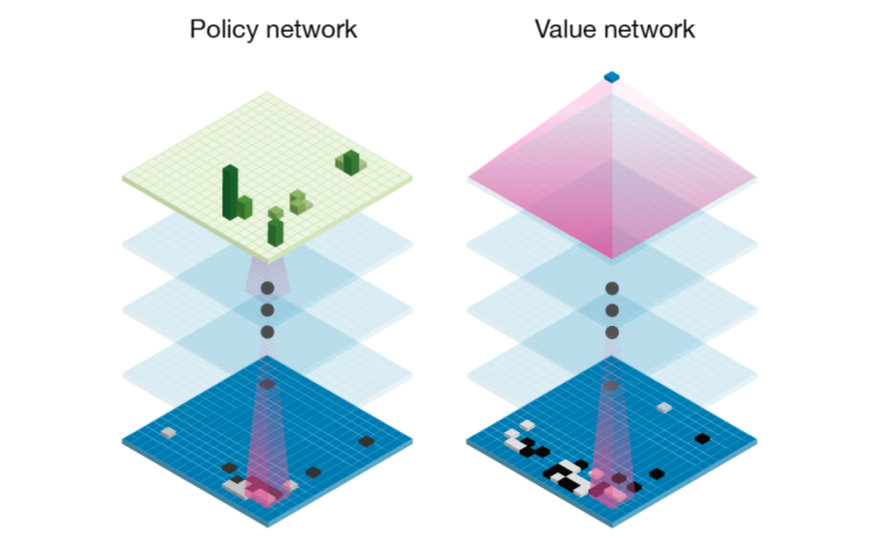 Both the policy and the value have a very intuitive meaning:

Each of these networks on their own is already very powerful: If you only have a policy network, you could simply always play the move it predicts as most likely and end up with a very decent player. Similarly, given only a value network, you could always choose the move with the highest value. However, combining both estimates leads to even better results.

Similar to AlphaGo and AlphaZero before it, MuZero uses Monte Carlo Tree Search2, short MCTS, to aggregate neural network predictions and choose actions to apply to the environment.

MCTS is an iterative, best-first tree search procedure. Best-first means expansion of the search tree is guided by the value estimates in the search tree. Compared to classic methods such as breadth-first (expand the entire tree up to a fixed depth before searching deeper) or depth-first (consecutively expand each possible path until the end of the game before trying the next), best-first search can take advantage of heuristic estimates (such as neural networks) to find promising solutions even in very large search spaces.

MCTS has three main phases: simulation, expansion and backpropagation. By repeatedly executing these phases, MCTS incrementally builds a search tree over future action sequences one node at a time. In this tree, each node is a future state, while the edges between nodes represent actions leading from one state to the next.

Before we dive into the details, let me introduce a schematic representation of such a search tree, including the neural network predictions made by MuZero: 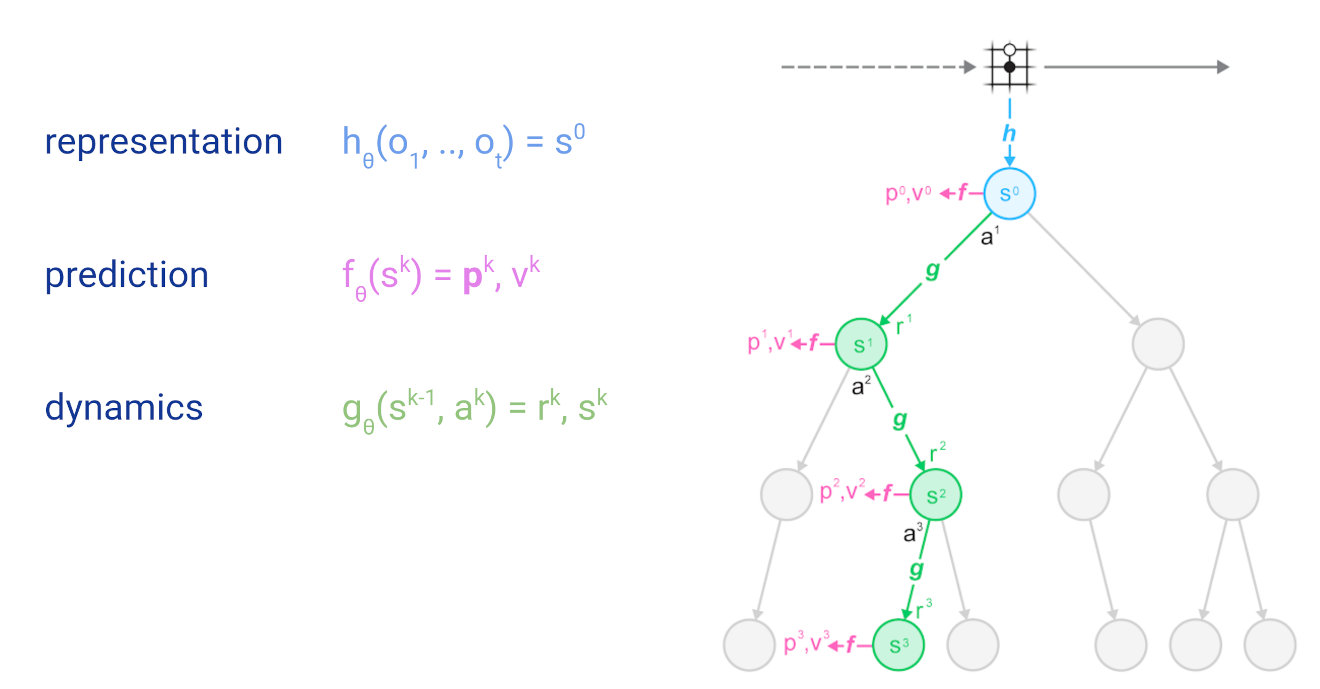 Circles represent nodes of the tree, which correspond to states in the environment. Lines represent actions, leading from one state to the next. The tree is rooted at the top, at the current state of the environment - represented by a schematic Go board. We will cover the details of representation, prediction and dynamics functions in a later section.

Simulation always starts at the root of the tree (light blue circle at the top of the figure), the current position in the environment or game. At each node (state $s$), it uses a scoring function $U(s, a)$ to compare different actions $a$ and chose the most promising one. The scoring function used in MuZero would combine a prior estimate $p(s, a)$ with the value estimate for $v(s, a)$:

where $c$ is a scaling factor3 that ensures that the influence of the prior diminishes as our value estimate becomes more accurate.

Each time an action is selected, we increment its associated visit count $n(s, a)$, for use in the UCB scaling factor $c$ and for later action selection.

Simulation proceeds down the tree until it reaches a leaf that has not yet been expanded; at this point the neural network is used to evaluate the node. Evaluation results (prior and value estimates) are stored in the node.

Expansion: Once a node has reached a certain number of evaluations, it is marked as "expanded". Being expanded means that children can be added to a node; this allows the search to proceed deeper. In MuZero, the expansion threshold is 1, i.e. every node is expanded immediately after it is evaluated for the first time. Higher expansion thresholds can be useful to collect more reliable statistics4 before searching deeper.

Backpropagation: Finally, the value estimate from the neural network evaluation is propagated back up the search tree; each node keeps a running mean of all value estimates below it. This averaging process is what allows the UCB formula to make increasingly accurate decisions over time, and so ensures that the MCTS will eventually converge to the best move.

The astute reader may have noticed that the figure above also includes the prediction of a quantity $r$. Some domains, such as board games, only provide feedback at the end of an episode (e.g. a win/loss result); they can be modeled purely through value estimates. Other domains however provide more frequent feedback, in the general case a reward $r$ is observed after every transition from one state to the next.

Directly modeling this reward through a neural network prediction and using it in the search is advantageous. It only requires a slight modification to the UCB formula:

where $r(s, a)$ is the reward observed in transitioning from state $s$ by choosing action $a$, and $\gamma$ is a discount factor that describes how much we care about future rewards.

Since in general rewards can have arbitrary scale, we further normalize the combined reward/value estimate to lie in the interval $[0, 1]$ before combining it with the prior:

The MCTS procedure described above can be applied repeatedly to play entire episodes:

Action selection can either be greedy - select the action with the most visits - or exploratory: sample action $a$ proportional to its visit count $n(s, a)$, potentially after applying some temperature $t$ to control the degree of exploration:

Now that we know how to run MCTS to select actions, interact with the environment and generate episodes, we can turn towards training the MuZero model.

We start by sampling a trajectory and a position within it from our dataset, then we unroll the MuZero model alongside the trajectory:

You can see the three parts of the MuZero algorithm in action:

The observations and actions used as input to the network are taken from this trajectory; similarly the prediction targets for policy, value and reward are the ones stored with the trajectory when it was generated.

You can see this alignment between episode generation (B) and training (C) even more clearly in the full figure:

Specifically, the training losses for the three quantities estimated by MuZero are:

Having examined the core MuZero training, we are ready to take a look at the technique that allows us to leverage the search to achieve massive data-efficiency improvements: Reanalyse.

In the course of normal training, we generate many trajectories (interactions with the environment) and store them in our replay buffer for training. Can we get more mileage out of this data?

Unfortunately, since this is stored data, we cannot change the states, actions or received rewards - this would require resetting the environment to an arbitrary state and continuing from there. Possible in The Matrix, but not in the real world.

Luckily, it turns out that we don't need to - using existing inputs with fresh, improved labels is enough for continued learning. Thanks to MuZero's learned model and the MCTS, this is exactly what we can do:

We keep the saved trajectory (observations, actions and rewards) as is and instead only re-run the MCTS. This generates fresh search statistics, providing us with new targets for the policy and value prediction.

We have two sets of jobs that communicate with each other asynchronously: 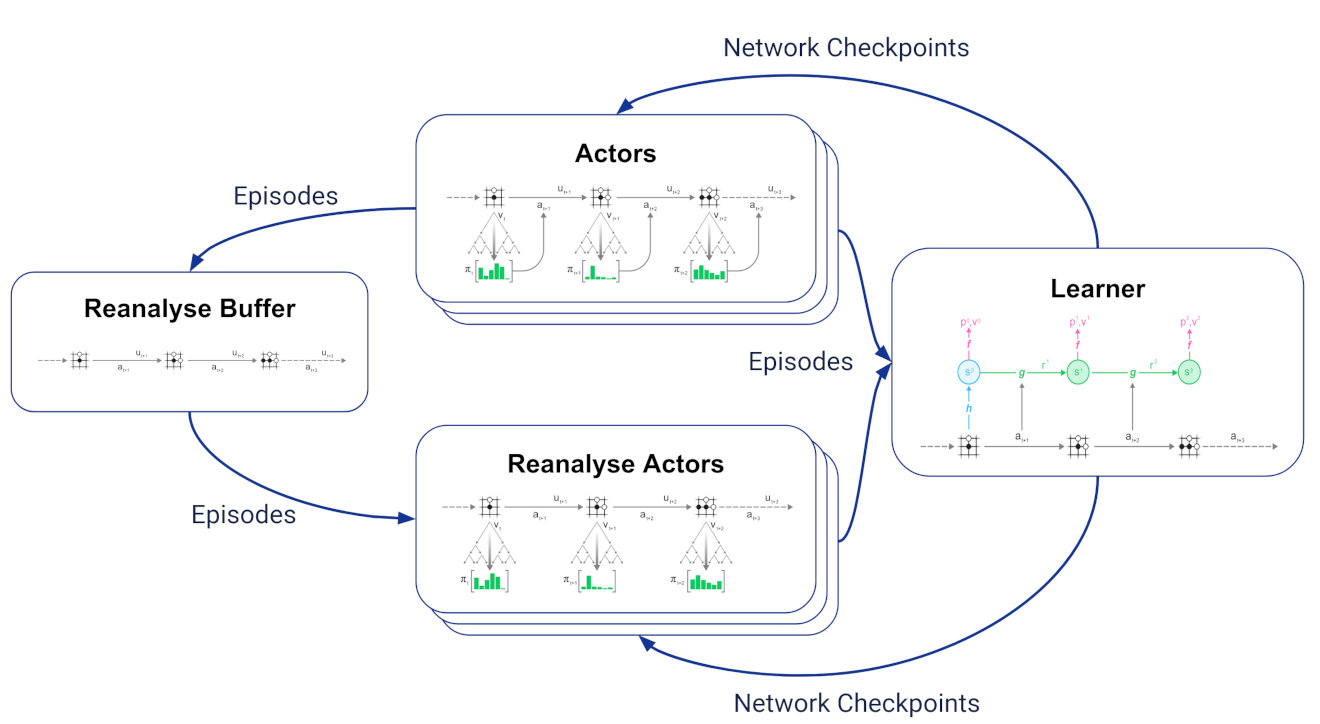 What's in a name?

MuZero's name is of course based on AlphaZero - keeping the Zero to indicate that it was trained without imitating human data, and replacing Alpha with Mu to signify that it now uses a learned model to plan.

Digging a little deeper, we find that Mu is rich in meaning:

I hope this summary of MuZero was useful!

If you are interested in more details, start with the full paper. I also gave talks about MuZero at NeurIPS (poster) and most recently at ICAPS.

Let me finish by linking some articles, blog posts and GitHub projects from other researchers that I found interesting: